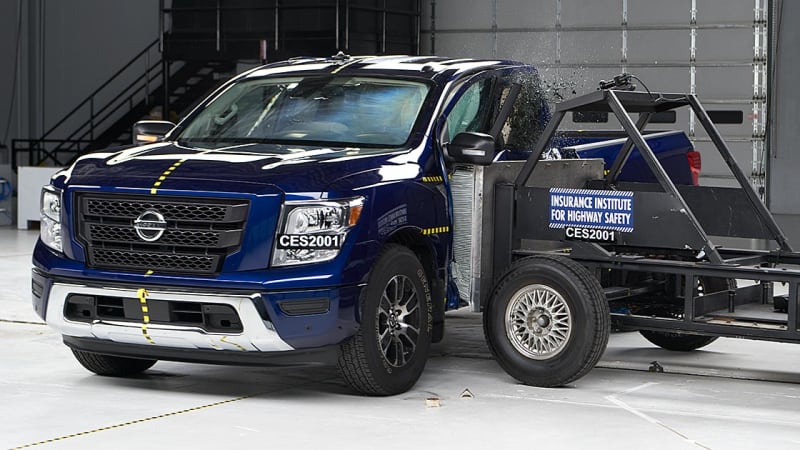 Conventional wisdom would have you think cars and trucks that have been updated or are all-new do better in crash tests than their predecessors. That’s not the case with the 2021 Nissan Titan, which scored lower in the Insurance Institute for Highway Safety’s passenger-side small overlap test after changes to its underlying structure, the safety advocate says. What was it that the Mopar folks used to say? If you can’t Dodge it, Ram it? Well, maybe don’t try that in a new Titan.

According to the announcement, Nissan made changes to the 2020 Titan’s frame and several components of the cab, including the A-pillar, roof rail and lower sill. Part-way through the 2021 model year, more changes were made, including the addition of passenger-side knee airbags. This all sounds like good news on paper, but it appears that some of those structural changes had unforeseen consequences.

“While the 2019 crew cab earned a Good rating in all six of the [IIHS]’s crashworthiness evaluations, the 2021 model earns an Acceptable passenger-side rating due to increased intrusion into the front seat passenger’s space,” the organization said in its announcement. “The rating also applies to the 2021 Titan extended cab. The 2020 models were not rated for passenger-side small overlap protection.”

There’s more bad news for the Titan, too, as revisions from Nissan along with IIHS’s stricter 2021 requirements for lighting performance resulted in worse marks for the Titan’s available headlights, both of which received the lowest “Poor” rating. In 2020, Nissan had at least one “Marginal” configuration.

There is some good news, though, especially if you still prefer the “Dodge it” approach to pickup driving. Apparently the 2021 Titan is better at that, earning the best “Superior” ratings for both vehicle-to-vehicle and vehicle-to-pedestrian scenarios thanks to its updated suite of active safety systems.