While the latest RAV4 underwent a revolutionary redesign to reset its look, character and capability, a far more evolutionary approach was taken with its big brother Highlander’s own redo last year. The 2021 Toyota Highlander represents the second year of the current generation, which dawned wearing softer and more organic styling, a more welcoming cabin and an improved driving experience. Yet, the overall concept remained the same. It is a three-row family crossover, and although it grew just a smidgen to accept a bit more luggage, it remains one of the smallest choices in the segment. The third row is best used in a pinch. Apparently, Highlander customers didn’t have a problem with that, which says a lot, since there are a lot of them and they tend to be repeat shoppers of a nameplate that’s been around for 21 years.

Now, if you don’t foresee larger teens or adults needing that third row, then the Highlander’s more manageable size, ultra-efficient Highlander Hybrid model, impressive cabin quality, and time-tested dependability and resale value add up to a large family vehicle that’ll work for many. However, it has many impressive competitors, many of which cost the same or less despite offering more spacious and comfortable third-row seating. Among those are the excellent new Kia Telluride and Hyundai Palisade cousins, as well as the no-nonsense Honda Pilot and Subaru Ascent family haulers. The new Highlander makes a much more compelling case for itself against them, but we’d also highly recommend considering them all especially after determining how much room you really need.

The Highlander was completely redesigned last year, but 2021 sees the addition of the XSE trim level that combines the existing XLE’s upgraded appointments with unique chassis upgrades to achieve a more engaging driving experience. Those include a stiffer, sport-tuned suspension, a stiffer rear anti-roll bar and reworked steering that should be more responsive. There’s also unique styling, including a reshaped grille that juts forward above an enlarged lower air dam that looks an awful lot like the one on the Sienna SE. There’s also a widened rear bumper, blacked out exterior trim, carbon-fiber-look interior trim and an exclusive upholstery consisting of black SofTex vinyl with cloth inserts that can be supplanted by optional red leather.

Admittedly, the video above is indicative of the higher XLE, Limited and Platinum trims – the lower L and LE are rather dour and monochromatic affairs. Yet, even those have above-average interior quality, and since those pricey trims tend to be popular, it’s worth extolling their virtues a bit. The earthy two-tone color schemes are distinctive, warm and generally inviting. The silver trim that wraps around the control binnacle like a fork is textured to make it look richer and more like actual metal. The wood trim on the dash and center console, be it real or not, is subtle and tasteful. The padded SofTex vinyl that covers much of the dash, doors and center console is pleasant to touch, while the real leather on the seats is buttery soft. All the switchgear is pleasant to touch and operate.

Standard on most trim levels is an 8-inch touchscreen interface, which is mounted high within easy reach and sight. We like that it’s one of the easier systems to use, especially its audio controls, but those seeking a quicker, more modern interface may find it behind the times. Kia, Hyundai and Subaru’s systems in particular are superior.

Yet, as the below video demonstrates, the Limited and Platinum can be outfitted with a 10.25-inch unit that is largely similar in terms of its basic look and operation, but gains functionality by adopting a widescreen orientation. The infotainment features it controls are identical to those that come standard on the Limited, including an 11-speaker JBL audio system and integrated navigation (yes, that can still be handy), plus those features standard on every Highlander: Android Auto, Apple CarPlay, Amazon Alexa connectivity, satellite radio, in-car WiFi and Safety Connect emergency services. There are also five standard USB ports (one media, four charging) and the Driver Easy Speak system that broadcasts the driver’s voice through the rear speakers.

How big is it?

The Highlander is smaller than most of its competitors on the outside, which makes it slightly more manageable to maneuver and park. Perhaps there’s a greater chance of it fitting inside your garage. We’re only talking a few inches, though, as the Highlander is still an awfully big vehicle.

Not surprisingly, the Highlander’s small exterior size translates into a smaller interior relative the segment. There’s just a bit less headroom, which taller teens or adults may notice in the second row when equipped with the panoramic sunroof, and the third-row is noticeably much smaller than those of competitors. Even the Honda Pilot, which has comparable exterior dimensions, can fit average-sized adults in its third row. So too can the larger Telluride, Palisade and Ascent among others. The Highlander’s rearmost row is really a kid-only zone, and even then, they will be less comfortable and possibly a bit claustrophobic back there.

At least the second row offers plenty of space (a bench is standard but you can opt for captain’s chairs) and the sliding seats are mounted at a height that allows adults and teens to be comfortable for hours on end. Comfort is excellent up front, too, as the driver seat offers abundant adjustability and easy reaches to the steering wheel and infotainment controls.

Cargo space was expanded with the new model, which can be seen in 2.2 extra cubic feet behind the raised third row. Still, in comparison to the Hyundai Palisade and several other competitors, there’s still less space when all the seats are raised. Our can see our in-depth 2020 Toyota Highlander Luggage Test to see just how much luggage you can fit behind the third row. There’s less when they’re lowered too, but that isn’t as much of an issue since you’re basically dealing with varying degrees of enormous. 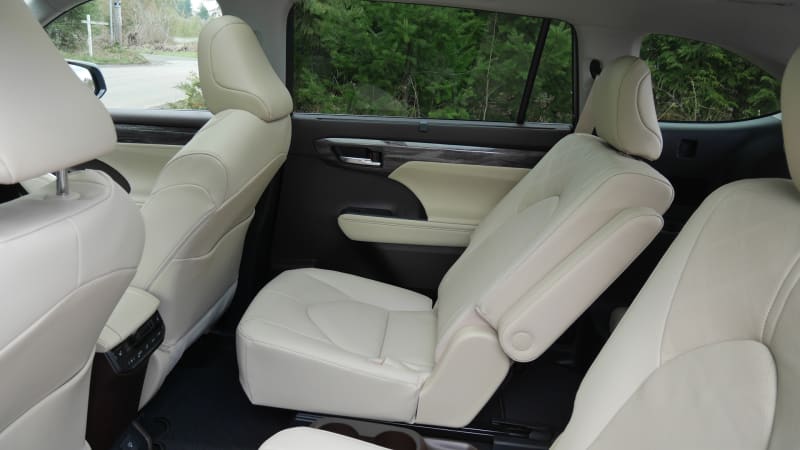 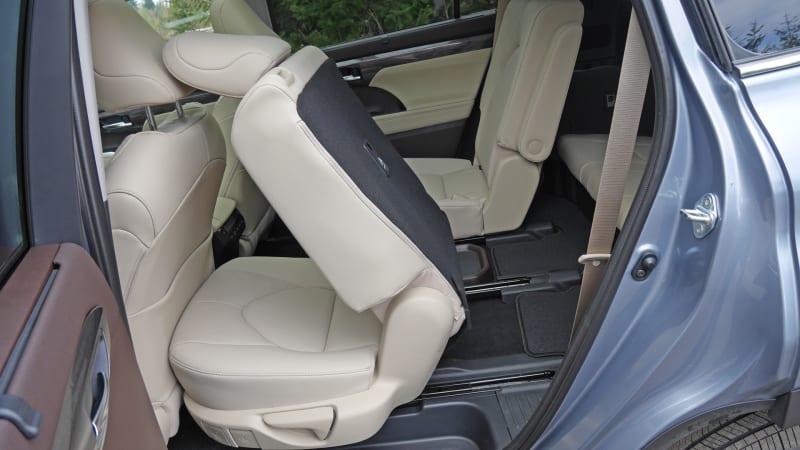 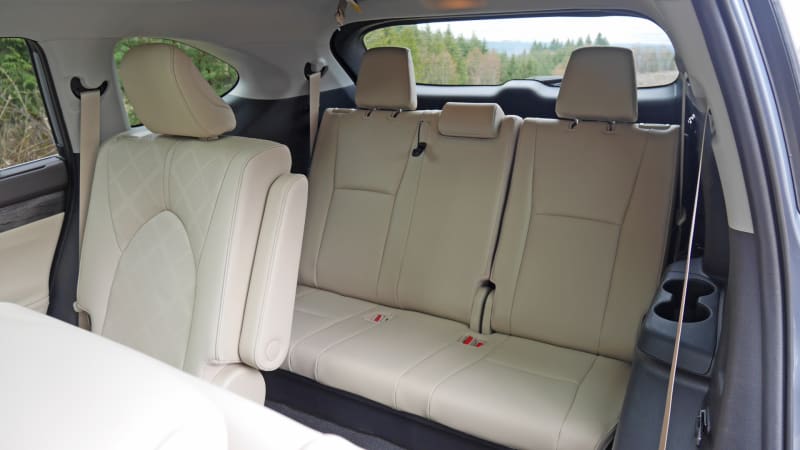 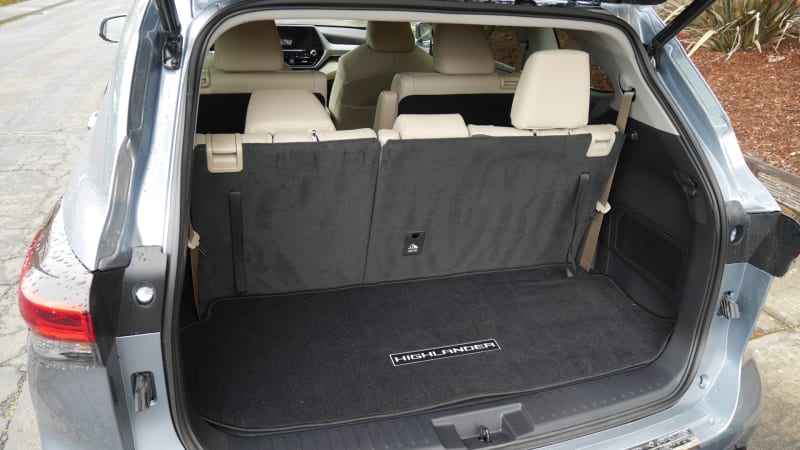 What’s the performance and fuel economy?

The 2021 Highlander comes standard with a 3.5-liter V6 that produces 295 horsepower and 263 pound-feet of torque. That’s one of the greatest outputs in the segment, and considering the Highlander weighs less than many competitors, expect strong acceleration. An eight-speed automatic and front-wheel drive are standard. There are two all-wheel-drive systems available: a basic one that sends power to the rear wheels when extra traction is needed, and a more advanced system for the Limited and Platinum that can also differ the amount of power between the left and right rear wheels to further enhance traction (AKA torque vectoring). Fuel economy differs by trim level and drivetrain, but they’re all between 20-21 mpg city, 27-29 mpg highway and 23-24 mpg combined. Fuel economy for the new XSE was not available at the time of this writing.

The 2021 Toyota Highlander Hybrid uses a 2.5-liter four-cylinder paired with electric motors that produce a net output of 243 hp. Front-wheel drive is standard, but another electric motor can be added to the rear axle to provide optional all-wheel drive. No three-row crossover comes close to its fuel economy: 35 mpg combined with AWD or 36 mpg with FWD. Those numbers equate to saving $550 per year according to the EPA when comparing the V6 Highlander AWD with the Hybrid AWD. 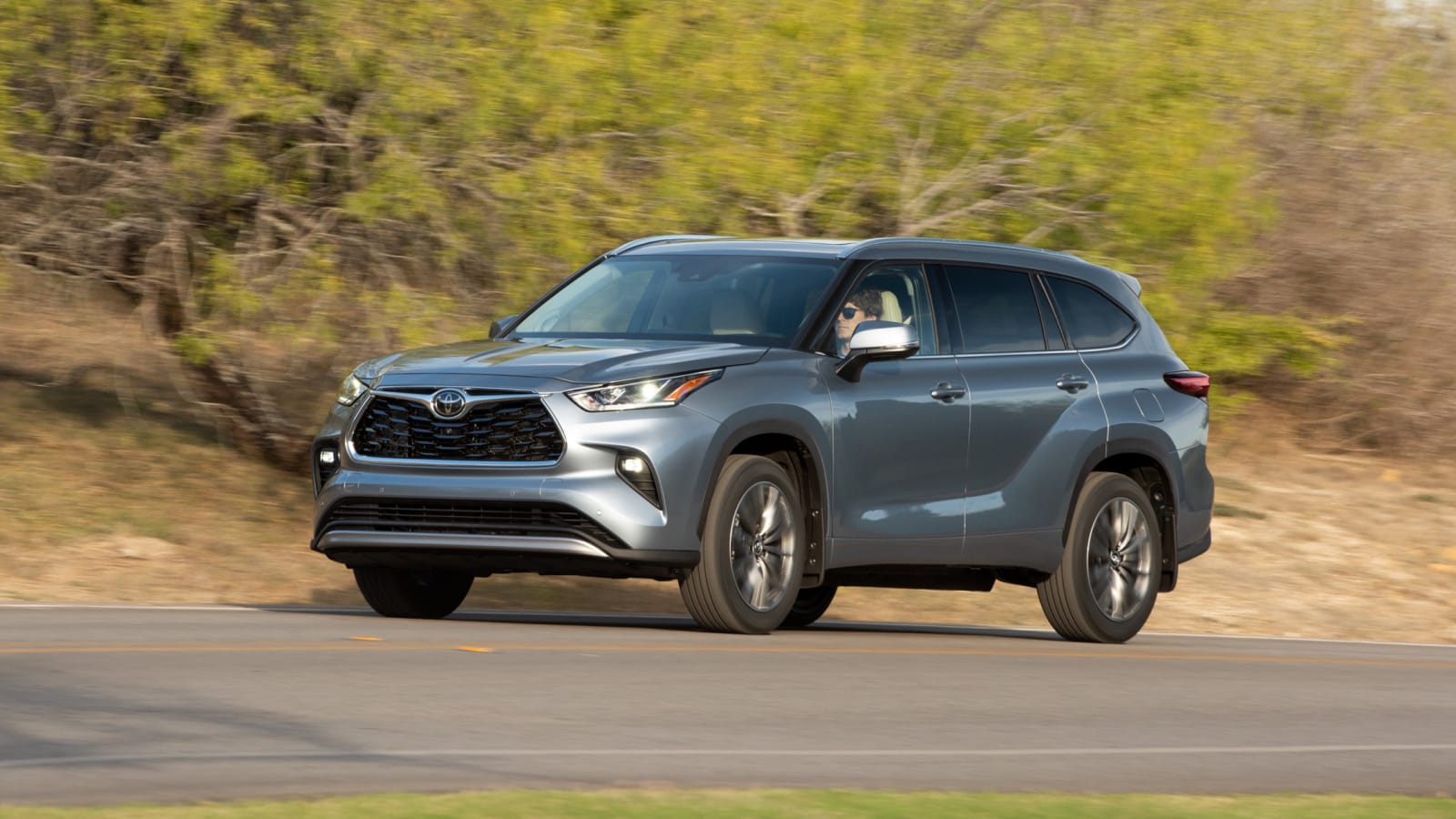 This is by far the best Highlander to drive yet, and is also one of the most composed vehicles in the segment. It doesn’t feel that big behind the wheel, and the chassis and steering work nicely in concert with each other to create a driving experience that feels consistent regardless of whether you’re driving the kids to school, on a long highway trip or find yourself on a winding mountain road. It’s not an athlete like a Mazda CX-9, and we doubt the new Highlander XSE will turn up the dial that much either, but in comparison to other family haulers, the Highlander nicely balances ride comfort and reassuring handling. There’s a Sport mode you can select, but the changes to the steering, throttle and transmission are difficult to detect.

The base V6 is strong, smooth and has a nice snarl when pushed. We’re also happy that Toyota got rid of the old Highlander’s hopelessly mushy and unresponsive throttle pedal. This one works as it should, as does the notably firm, reassuring brake pedal. That said, we like the Highlander Hybrid better. It feels quicker off the line and is smoother at around-town speeds, even if getting up to highway speed is noisier and takes longer. You get the same above-average ride and handling and, of course, unbeatable fuel economy for a modest price premium that could easily be paid off within three years of gas savings.

What more can I read about the Toyota Highlander? 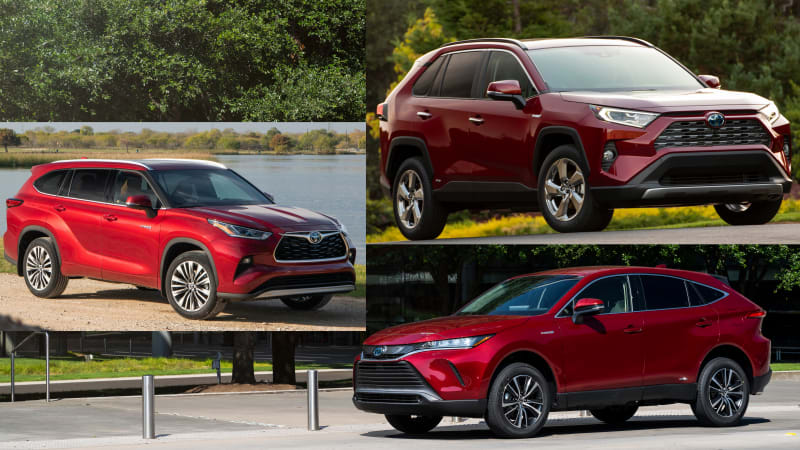 In this review and video, we discuss in detail the Highlander’s attractive and well-made interior. 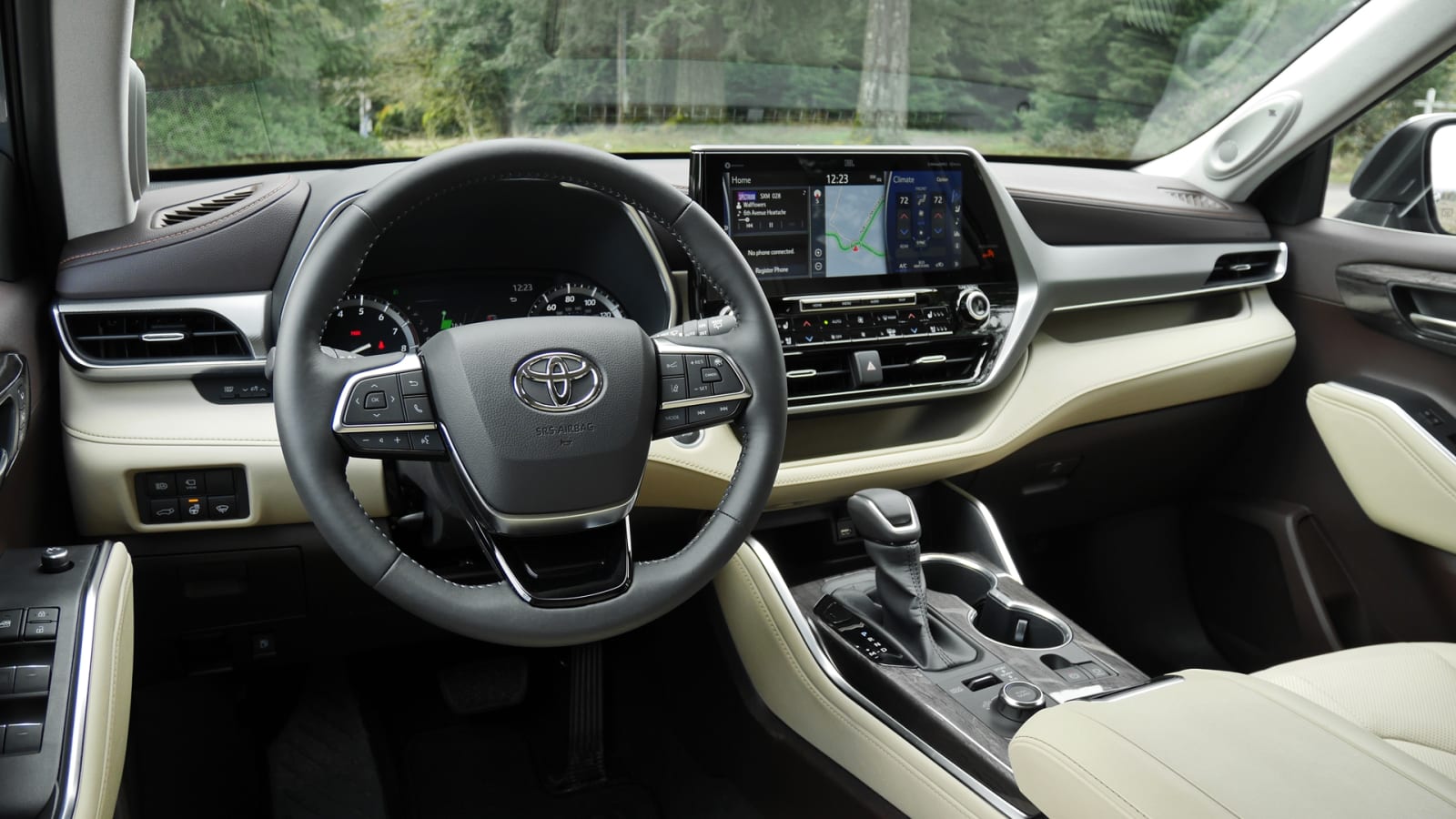 The Highlander gained more space behind its third row for the latest generation, but remains one of the smallest in the segment. We put that space to the test. 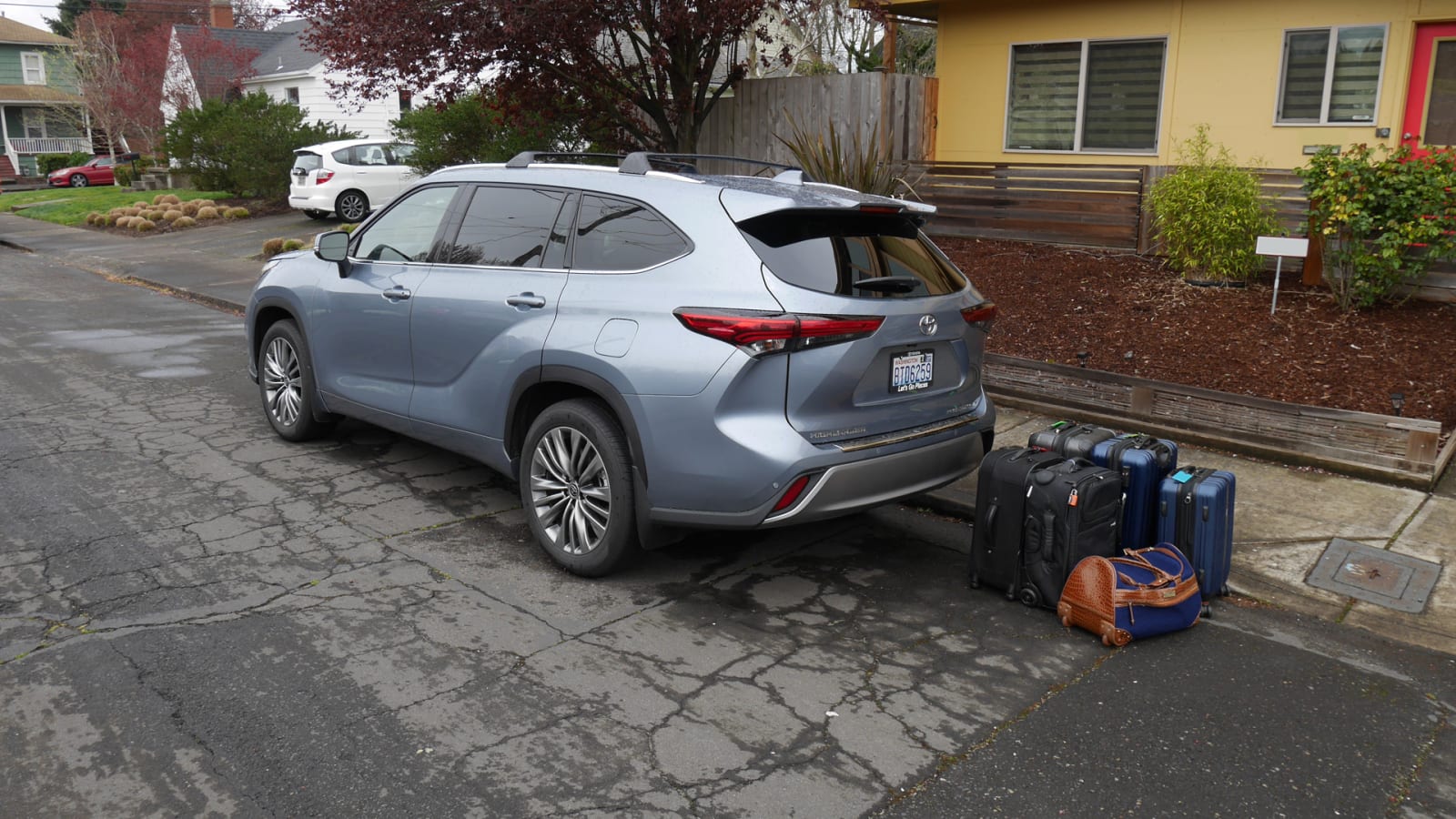 We review the excellent new widescreen infotainment system in this article and video. 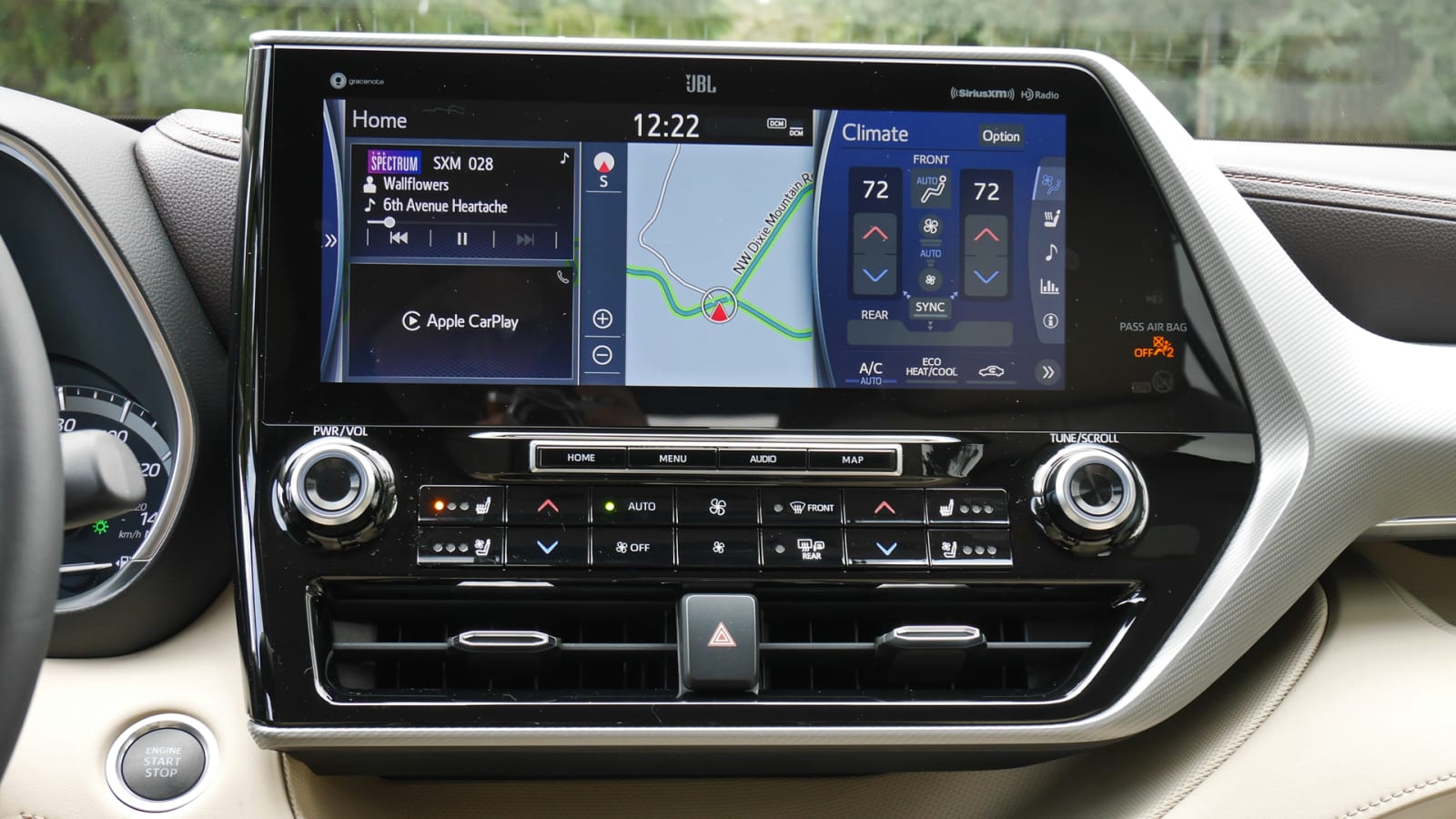 Our first driving impressions of both the V6 Highlander and the Highlander Hybrid, including more information about what’s new, its engineering and design.

We detail the newest member of the Highlander family, introduced for 2021.

What features are available and what’s the Highlander’s price?

Pricing has not been announced for 2021, but we anticipate that it’ll be virtually the same as the below 2020 prices, with perhaps a few hundred bucks added. Eight-passenger seating with 60/40-split second- and third-row seats are standard. Middle-row captain’s chairs are optional on certain trim levels.

You can find a full breakdown of features, specs and local pricing for the Toyota Highlander here and for the Highlander Hybrid here.

What are the Highlander’s safety equipment and crash ratings?

The Insurance Institute for Highway Safety named the Highlander a Top Safety Pick for its best-possible crash protection and crash prevention scores. Its headlight ratings varied depending on trim level and its LATCH anchors received a rating of “Good” for ease of use.