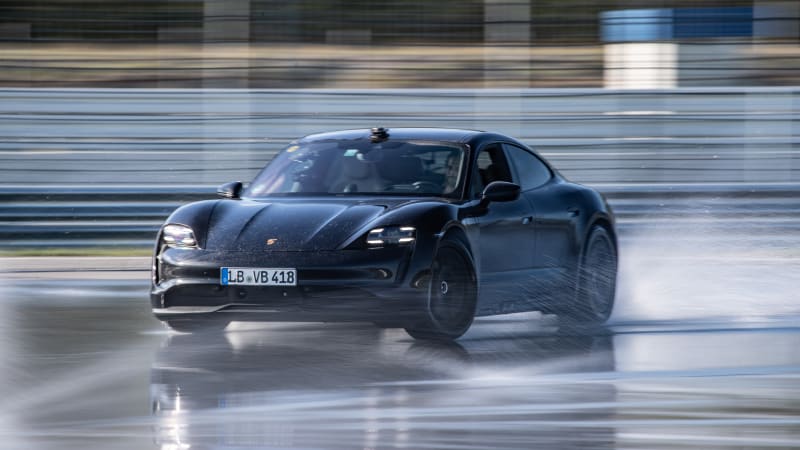 It sounds like a wedding dance, but electric drift is the latest automotively themed Guinness record to be set. To be specific, it has to do with the Porsche Taycan EV, which now holds the world record for longest drift of an electric vehicle. The bar was set at the second German Porsche Experience Center, which opened October 2019 at the Hockenheimring.

The pre-production Taycan drifted for 55 continuous minutes around a 200-foot-long skidpad. Judges, including 2018-19 European drifting champion Denise Ritzmann, were on hand to check if the front tires ever pointed in the same direction as the curve. But PEC chief instructor Dennis Retera was able to hold the car in oppo for the entire 210 laps, or 42.171 kilometers. The average speed was 28.6 mph. Driving stability programs were all switched off, of course.

For drifting purists, this may seem like a cop-out, as the PEC had sprinklers irrigating the track to keep it low-traction. A more true-to-form feat would have been a record-setting drift in dry conditions, tires squealing and smoking in protest.

Regardless, it’s an accomplishment. Retera said that it was “Very tiring for me to keep my concentration high for 210 laps.” The Dutchman continued, “I concentrated on controlling the drift with the steering – this is more efficient than using the accelerator pedal and reduces the risk of spinning.”

It should be pointed out though, that the Taycan in question is a rear-wheel-drive model, which hasn’t been confirmed for the United States. It is for sale in China, though, minus one electric motor from the AWD version. It’s still good for 402 horsepower with a 79.2 kWh Performance Battery, or 469 horses with the 93.4 kWh Performance Battery Plus. It costs about 20% less than the AWD Taycan, so if the U.S. pricing structure matched China’s it could cost around $85,000. Porsche says its U.S. availability is “in consideration“.