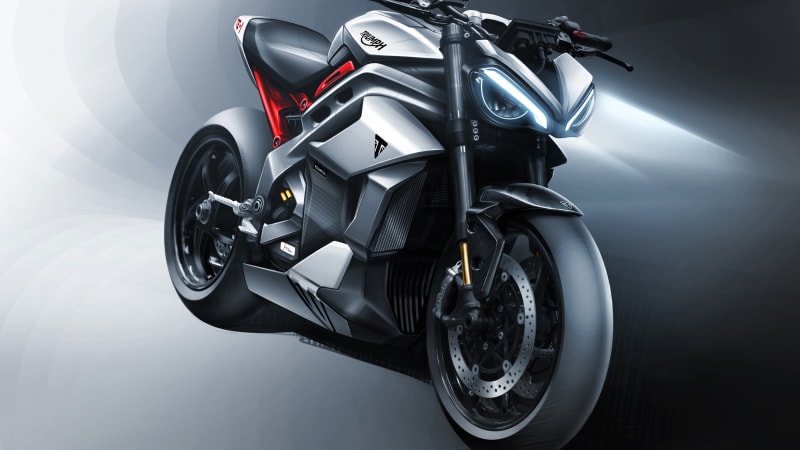 Triumph is preparing to add at least one electric motorcycle to its range. It released sketches of a concept and images of a close-to-production drivetrain to illustrate the path it plans to take to the world of electrification.

Called TE-1, the prototype depicted in the sketches wears a sporty design that doesn’t scream, “Look at me, I’m electric!” Add an exhaust system, and it could easily pass as a gasoline-powered bike. That was intentional, according to the company. It wants the TE-1 to appeal to enthusiasts currently riding a piston-powered model.

Triumph launched the EV project in May 2019 with funding from the Office of Zero-Emission Vehicles, meaning British taxpayers contributed to the bike’s development. It enlisted the help of Williams Advanced Engineering, Integral Powertrain, and WMG at the University of Warwick. Nearly two years later, the quartet designed a system that reportedly strikes an ideal balance between power and energy. Triumph noted a lot of attention was allocated to the 15-kilowatt-hour battery pack, which was developed to deliver sustained power and quick charging times.

Power for the TE-1 comes from an electric motor that delivers 174 horsepower at peak and 107 horses of continuous power. Triumph chose not to publish additional specifications, but Motorcycle News learned the bike weighs 485 pounds and offers up to 120 miles of range. Quick-charging technology zaps the battery pack with an 80% charge in about 20 minutes. Triumph stressed it aimed to give riders the performance of an internal-combustion-powered bike in an electric package, but what you see isn’t necessarily what will land in showrooms.

Triumph will begin testing the TE-1 prototype in the coming months, but it told Motorcycle News that it still needs to clear the cost hurdle before it approves the model for production. When it will do that is up in the air.

“For us, it has to be at a price point where there’s enough people willing to pay for it. While battery costs are coming down, they’re still expensive, so the bike will come to the market when we can get it down to a price that we think people are willing to pay,” concluded Steve Sargent, the company’s chief product officer.

Tesla has closed its forums to launch a social platform and fans are not happy
The Jaguar E-Type is 'the most beautiful car ever made' and Omaze is giving one away
How idled car factories supercharged a push for U.S. chip subsidies